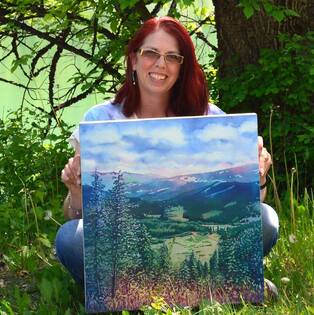 Leslie Lambert, also known as Leslie Redhead, is an artist, teacher, illustrator, and author known for her dramatic watercolors. Her art focuses on the combination of spontaneity and detail that watercolor has to offer. She continues to explore the possibilities and pushes the medium beyond its limitations to achieve luminous and incredible results.

Leslie was raised in the suburbs of Washington, DC where her mother took her to visit the National Gallery of Art and the Hirshhorn Museum on a regular basis. This led to an interest in the visual arts
and she was accepted into and attended a high school that specialized in the arts. In her senior year of high school, Leslie’s family moved to Salt Lake City. From there, Leslie decided to attend a year of university in Hawaii where she continued her education in art, studying figure drawing with Jan Gordon Fisher, a sculptor of many of the island’s statues, including the famed sculpture of Duke Kahanamoku
in Waikiki.

After a year in Hawaii, she attended Brigham Young University in Provo, Utah and decided to pursue scientific illustration by getting a Bachelor of Science degree in Zoology. This led to working with and drawing dinosaur bones at the University of Utah’s Natural History Museum.

In 1998, Leslie and her children moved to the Boston area where she returned to her love of painting figures and portraits, learning watercolor under the direction of Beth Patterson. Her work at the time was included in the Northeast Watercolor Society’s juried exhibitions and won her many awards in the Boston area.

Leslie and her family moved to Victoria, BC in 2006. It was at this time that Leslie began teaching more and discovered a love for landscapes. She became a popular teacher in both Victoria and Vancouver, as well as teaching at different resorts around the islands and in Spain. She returned to school to receive a Master of Art Education at the University of Victoria, earning her degree in 2013 as well as signature status with the Canadian Society of Painters in Watercolour. She began teaching painting, drawing, and digital arts for the Art Education department at the University in 2015 and continues to do so online.

Leslie moved back to the States in 2017, first living in Southern Idaho and now in Northeast Washington, north of Spokane.

Leslie’s paintings are in private and corporate collections worldwide. In addition to the signature status with the CSPWC, she is a signature member of the Northwest Watercolor Society (NWWS).  Leslie is the author of Watercolor 365 and the illustrator of Island in the Salish Sea, by Sheryl McFarlane. Leslie conducts watercolor workshops online and in Canada, the U.S., and Spain. She will be conducting a workshop in Morocco this coming October. More of her work can be found at leslielambertart.com